Poems from around the globe!

Home » Uncategorized » Poems from around the globe! 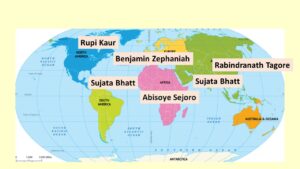 Take some Picts, Celts and Silures

And let them settle,

Then overrun them with Roman conquerors.

Remove the Romans after approximately 400 years

Add lots of Norman French to some

Trinidadians and Bajans with some Ethiopians,

Then take a blend of Somalians, Sri Lankans, Nigerians

Combine with some Guyanese

And turn up the heat.

Iraqis and Bangladeshis together with some

Then add to the melting pot.

Leave the ingredients to simmer.

As they mix and blend allow their languages to flourish

Binding them together with English.

Allow time to be cool.

Add some unity, understanding, and respect for the future,

Note: All the ingredients are equally important. Treating one ingredient better than another will leave a bitter unpleasant taste.

Warning: An unequal spread of justice will damage the people and cause pain.

Give justice and equality to all.

Where the mind is without fear –  Rabindranath Tagore

Where knowledge is free

Where the world has not been broken up into fragments

Where words come out from the depth of truth

Where tireless striving stretches its arms towards perfection

Where the clear stream of reason has not lost its way

Into the dreary desert sand of dead habit

Where the mind is led forward by thee

Into ever-widening thought and action

Into that heaven of freedom, my Father, let my country awake.

Speak to the lands,

they are awaiting your call,

your recognition of respect

for your ancient land.

Reward those with your thoughts:

those who had planted the seed,

nurtured the harvest of your being;

Call together your children,

and their children, on this day.

feast with them on the knowledge

what is there to be ashamed of

and my mother tongue

is her father’s words

what does it matter if

land of milk and honey

Africa land where i live

A land of great rulers

A land were nature lives

A land blessed by God himself

On the day of creation

land of milk and honey